Hybla Valley Elementary School opened during the 1964-65 school year. Our building was still under construction when schools opened in September, so the first Hybla Valley students attended other area schools on modified shifts until at least the end of November. Our first principal was Harriett G. Trites.

Hybla Valley Elementary School was designed by the architecture firm of Beery & Rio of Annandale in 1963, and was built by Earl K. Rosti, Inc., at a cost of $507,202. Designed to house 600 students, Hybla Valley had 20 classrooms and approximately 350 students in first through sixth grade during its first year.

Hybla Valley Elementary School opened at a time when Fairfax County Public Schools (FCPS) was in the process of racially desegregating its schools. In 1965, almost every former all-African-American FCPS elementary school ceased operation (one notable exception is Louise Archer Elementary School in Vienna). These schools were located in predominantly African-American enclaves, necessitating the busing of students out of these neighborhoods to formerly all-white schools.

In 1965, Hybla Valley absorbed students from Drew-Smith Elementary School, marking the beginnings of the ethnically and culturally diverse school community we treasure today.

When Hybla Valley Elementary School opened, our school did not have a gymnasium or music room, and the library was originally located in the front hallway across from the main office. Physical education and music were taught in an empty classroom until 1988, when the gymnasium and an adjacent music room were constructed. 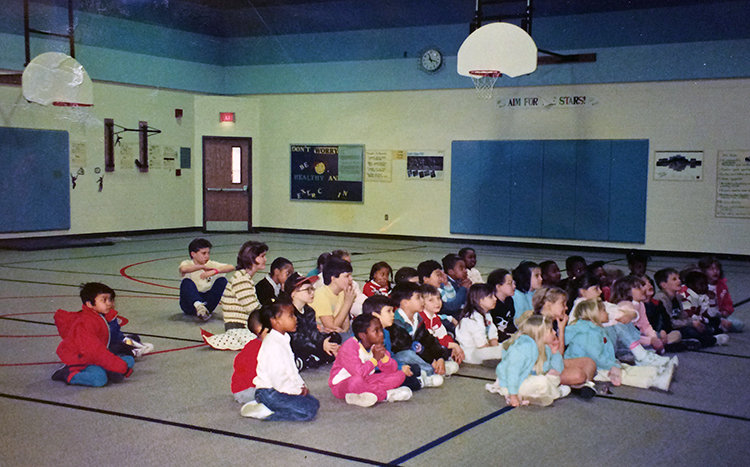 By the late 1990s, the school age population in the Hybla Valley area was on the rise. In 1999, construction began on an addition of eight classrooms to our school, but even with the additional space overcrowding persisted. In 2000, FCPS officials informed the School Board that enrollment at Hybla Valley was projected to rise from 678 to 810 by the 2004-05 school year, so a 10-classroom modular building and additional trailers were brought in to relieve overcrowding.

The most recent additions to our school began construction in 2009 and 2014 respectively. During the 2009-10 addition, a two-story classroom wing was constructed. This addition included nine general education classrooms, one music classroom, one band and strings classroom, one art classroom, four English as a second language classrooms, four special education classrooms, and one speech classroom. The 2014 addition expanded the size of our cafeteria and kitchen. Watch these changes unfold in this animated series of aerial photographs courtesy of the Fairfax County Park Authority.

What’s in a Name?

Did you know that our school was built on land that was once part of an airport? Learn about the origin of the name Hybla Valley and about the history of the Hybla Valley Airport in this video produced for Fairfax County Public Schools’ cable television channel Red Apple 21.

In 2004, a new computer lab was built at our school. The lab was open to the community after school and on Saturdays, and approximately 200 students used the lab each week during non-school hours. The computer lab was made possible by a partnership between FCPS, the county government, and the non-profit foundation Win-Win Strategy.

In February 2014, the Virginia House of Delegates and Senate passed a joint resolution commending our school on its 50th anniversary. During that 50 year span, our school population grew from 350 to 935 students, but our core values and commitment to the success of our students remained the same. The true history of Hybla Valley is less about the building and more about the people.

Today, Hybla Valley Elementary School works together with students, parents, and the community to create a positive learning environment in which all students can thrive. Programs like family nights, girl power, literacy collaborative, and a multitude of after-school programs, help students achieve greatness both inside and outside of the classroom. Our responsive classroom school model, technology integration into the curriculum, and our emphasis on literacy, hands-on experiences, and character education, are creating students who will become the positive, compassionate leaders of the next generation.